During the Sixties and Seventies, blind people could avail many blue and white collared jobs. In textile mills, they worked as bobbin-cleaners, in Factories as Packers and Assembly-workers, in hospitals as Physiotherapists, in Schools as music teachers and telephone operators in Public and Private sector offices. However, in eighties labour unrest resulted in closure of mills and factories which lead to loss of blue-collared jobs.

Later on advent of automation and computers demanded specific skills for which V.I. people were not equipped with in those days. Already the jobs like Telephone Operators were defunct. Sharp increase in the population due to migrants further deprived them of job opportunities.

Under the circumstances, V.I.people had to look out for new avenues for their survival. Some of them opted for Telephone booths while many of them turned to lottery-ticket selling and hawking as Self-employment. However, the earning through this was insufficient for their daily living.

Under the Self-employment Scheme, one more activity- Ubtan Project – was started by BPA in 2013 Diwali for blind women. Four V.I.women from Vangani village packed 5000 Ubtan packets, which were sold at different stalls throughout Mumbai by our staff and volunteers. The profit earned through this was distributed amongst the packers, which made their Diwali fragrant. We hope this will go a long way to help visually impaired women to earn their livelihood.

Another new activity under Self-employment Scheme was Masseur Camps. BPA organized three Masseur Camps in the year 2013-2014 at Dadar, Andheri and Borivali. In these camps, eight visually impaired masseurs could exhibit their skills in Foot Massage, Head Massage, Back Massage and Shoulder Massage etc.Through this they could earn adequate income, which boosted their confidence. We got an overwhelming response from the visitors for this camp and received many inquiries for the home visits. The response towards these camps made us believe that this type of activity will certainly help in making these masseurs self-sufficient. We at BPA now merely guide them and encourage them to handle the event independently.

During festival times like Diwali, many “Bazars” are held at various places .If a slot is made available to Masseur camps or us for Ubtan-selling with low cost or free of cost, this will go a long way to make some of the V.I. people self-sufficient. In addition, the Malls in city and various suburbs can help us by providing their lobby for such activity.

We request you to participate actively in these schemes by making  stalls available at free of cost. 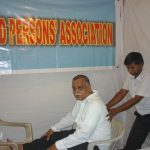 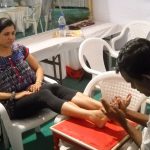 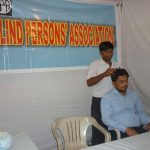 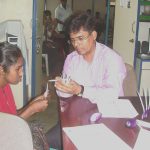 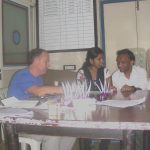 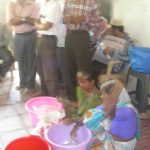 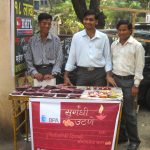